Column: Remember the hungry this Christmas

No one should go hungry, especially at this time of year. There is enough food on the planet for everyone.

Communities and nations are stronger when people are fed and nourished. So let’s make sure no one goes hungry this holiday season and throughout the year.

See my column at Cincinnati.com

October 5th, 1947- Secretary of State George C. Marshall talks about hunger in Europe after World War II and food conservation. This was part of a special broadcast which included the first presidential address ever televised from the White House. See the video on YouTube.

The UN World Food Programme (WFP) released a video today appealing for donations to feed Syrian war victims. The civil war, now in its 4th year, has left millions of Syrians displaced and in need of life-saving food from WFP.

On this day in history, Secretary of State George Marshall called upon Americans to fight the remaining enemy from World War II: hunger. Still reeling from the destruction of the war, nations in Europe were suffering food shortages.

Drought had struck that summer. Crops were ruined. The hunger crisis overseas intensified, threatening the recovery of Europe.

President Harry Truman formed the Citizen’s Food Committee to promote the saving of food. Marshall followed Truman’s speech earlier in the day with a statement of his own. Marshall said,

Every American, I am sure, will gladly share his bounty with the hungry men, women and children of Europe. Food is the very basis of all reconstruction. Hunger and insecurity are the worst enemies of peace. For recovery and political stability, Europe needs many things, but the most elemental, indispensable need is food.”

The fight against hunger was a critical aspect of the Marshall Plan to rebuild Europe. For without food, there could be no reconstruction.

That winter the U.S. approved an interim food aid plan to feed France, Austria, and Italy. This food aid preceded the larger Marshall Plan, which was passed in 1948. Americans also donated food in the form of CARE packages and other instruments of humanitarian aid.

Marshall’s words are timeless, and we need to remember them today. We are facing a global hunger struggle, with the most refugees since World War II. Wars in Syria and Iraq increase the numbers of hungry daily. Food is essential to winning the peace today as it was after World War II.

On this day in history, October 1, 1947, President Harry Truman hosted a special meeting at the White House about hunger. He met with the newly formed Citizen’s Food Committee.

Their goal was to stop the wasting of food. Europe was facing a desperate hunger crisis. The more food saved meant the more that could be sent overseas to feed the hungry.

The Citizen’s Food Committee was led by Charles Luckman, the President of Lever Brothers of Massachusetts. Their job was to take the message of no food waste to the American public. Truman said,

The Committee helped to raise awareness about food waste, but also hunger across the globe. In the coming months Americans would donate lots of food overseas through events such as the Friendship Train. Going coast to coast the Train picked up canned goods to be shipped to Europe.

Defeating hunger was essential for building peace after the war. These are timeless lessons that Truman stressed as he sought the recovery of war-torn nations. At the White House meeting Truman emphasized,

Apart from humanitarian considerations, if rations are significantly cut this winter, economic rehabilitation will come to a stop. This, in turn, would increase the degree and duration of dependence by other nations on special assistance by the United States. Most important, if we turn our backs upon these people they will turn from hunger to despair and from despair to chaos in areas where stability is essential to the peace and economic security of the world.”

Food served as the foundation of the 1948 Marshall Plan, which ultimately rebuilt Europe. We need to remember these lessons today. Food can lead to peace and economic development. As war has engulfed the Middle East and Africa there are millions of refugees who are depending on international food aid.

Running to Save Children from Deadly Malnutrition 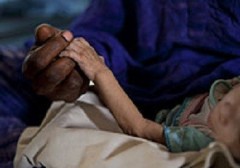 A mother attends to her severely malnourished child at an inpatient feeding centre in Mao, Chad. Plumpy’Nut is used to treat this potentially deadly condition (UNICEF Chad/2011/ Esteve)

Recently, I wrote about how you can raise money to fight global hunger by running and using the Charity Miles app. My fellow writer and runner, Elizabeth Paff, is joining in on this mission with a slightly different spin.

Elizabeth (Biz) is going to run and raise money for a food called Plumpy’Nut that saves the lives of starving children around the world. For every minute Biz runs through December 14, I will make a donation to Edesia, a non-profit organization that produces the Plumpy’Nut.

Each donation will buy a Plumpy’Nut meal (about 33 cents) which consists of a peanut paste fortified with crucial nutrients for children under the age of five. Without these nutrients small children can suffer lasting physical and mental damage.

Plumpy’Nut (as well as its variations like Plumpy’Sup) are currently being used in emergencies such as the conflicts in Syria, South Sudan, and the Democratic Republic of the Congo. Plumpy’Nut, which comes in a packet, is a food that can be easily distributed in these dangerous areas as it requires no refrigeration or preparation. In crisis areas there is a race against time to reach the hungry and especially the smallest children as they are the most vulnerable.

When the massive famine and drought struck East Africa last year it was Plumpy’Nut that saved many lives. When famine threatened the Sahel region of Africa this year Plumpy’Nut was again called into action. Edesia, which was recently featured on New England’s Chronicle TV show, produces Plumpy’Nut for aid groups like the World Food Programme, UNICEF, and others to use in the field.

Biz is a member of the Leadership Pathways program at the College of Mount St. Joseph, and is an activist fighting hunger. She will log her miles at Mount St. Joseph’s indoor track. I hope others will sponsor her running too and make the donations to Edesia as I am. This will make an inspired holiday gift. I am already counting her runs both Tuesday and Wednesday of 40 minutes each to the tally. So please join in.

Article first published as Running to Save Children from Deadly Malnutrition on Blogcritics.

Food for Peace, Brazil and the World Food Prize

“The national School Feeding Program has had a far-reaching impact on reducing child malnutrition by providing nutritious meals to children in all grades of Brazil’s public schools across the country. Forty-seven million were being served in 2010, with a minimum of 30 percent of the food supplied from local farms. Child malnutrition fell 61.9 percent between 2003 and 2009, and all age groups experienced improved access to quality food.”

Brazil has come a a long way in its fight against hunger and developing its school feeding. Back in the 1960s Brazil got help from the U.S. Food for Peace program. Here is a photo of a milk shipment leaving for Brazil. George McGovern, a World Food Prize winner himself, is to the far right. 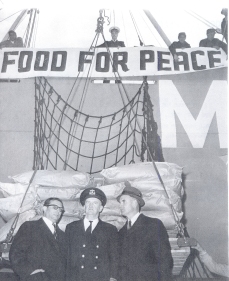 1962 Photo of the largest milk donation under the “Food for Peace” program leaving from Brooklyn, NY heading toward Brazil. Left to right is the Brazilian ambassador Roberto de Oliveira Campos; Capt. Timothy Harrington and George McGovern, the Food for Peace director. The milk will be used for maternal feeding and the school lunch program. (Library of Congress)

Today, Brazil supports school milk programs such as the one in Haiti. See my article Got Milk? Haiti’s Farmers and Now Schools Do.

Articles on Fighting Hunger in Yemen- by William Lambers 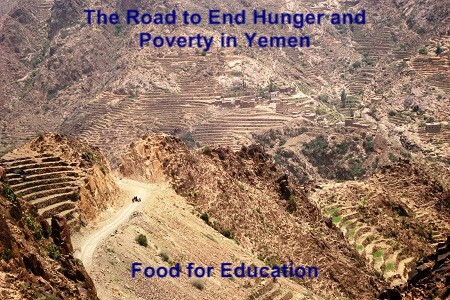 Hunger in Yemen: An Activist Spotlight

Food for Education is the Great Hope for Yemen (Yemen Post)

Interview: Geert Cappelaere of UNICEF on the Humanitarian Crisis in Yemen

Plotting the 2012 War Against Hunger in Yemen

In Yemen’s Arab Spring, Crucial to Look Beyond Al Qaeda

Yemen’s Future is Being Made Now

Could Yemen be the Next Somalia?

1000 Days of Peril in Yemen: The Children Must Be Fed

Plumpynut to the Rescue in Yemen

Yemen: What Can Be Done to Help Now

Yemen: When a “CARE Package” Brings Education and Hope

U.S. Wants Change in Yemen, But Where Is the food?

For Yemen There Is No Alternative To Peace

What Matters to the People of Yemen

Friends of Yemen can restart vital Food for Education program

Food for Education critical for Yemen and the Millennium Development Goals

Feed Those Displaced by the War in Yemen

What’s troubling about the Pentagon’s plan for Yemen

Against Hunger, Poverty, Desperation and Chaos in Yemen

Senate needs to back Yemen resolution with food aid

Relief Fund Created for Victims of Conflict and Hunger in Yemen

Food For Education Is The Great Hope For Yemen

Yemen Needs Its Own Roadmap to End Hunger

Stopping the Hunger and Despair in Yemen

Unrest in Yemen Over Food Shortages: U.S. and Allies Need to Take Action

Interview with Andrew Moore of Save the Children in Yemen

“The best way to really get at some of these underlying problems that exist is through an effective development strategy.” — Hillary Clinton

President Obama must lead to stop hunger crisis in Yemen

Sounding the alarm on hunger in Yemen

Conflict, hunger and the suffering of women in Yemen

Hunger, Conflict, and the Suffering of Women in Yemen

150 Million in Military Aid for Yemen, Still No Funding for School Feeding

Hunger the Worst Enemy of Peace in Yemen

Interview: Salman Omer of the World Food Programme in Yemen