While President Trump has been pressuring Ukraine’s government for dirt on his political rivals, according to a whistleblower complaint, he has ignored the humanitarian crisis in that war-torn nation.

There is a lack of humanitarian funds for civilians impacted by the fighting in Eastern Ukraine between the government and Russian backed separatist groups.

See my full commentary at The Hill

A group House members recently signed a letter recently calling for increased funding for McGovern-Dole global school lunch program. This is critical especially with the number of hunger emergencies around the world.

Representative Jim McGovern (D-MA) and Stee Watkings (R-KS) led the initiative which includes about 100 members including Alexandria Ocasio-Cortez (D-NY). Hopefully the w whole congress will support the increased funding. Here is a copy of the letter and all the signatories.

The decision of President Donald Trump and Secretary of State Mike Pompeo to withdraw the U.S. from the INF Treaty with Russia endangers our national security. Plain and simple.  Along with the Trump administration’s plans to develop new low-yield nuclear weapons, we are risking an arms race with Russia and others – a staggering, utterly unnecessary revival of an existential danger the world thought it had put to sleep a generation ago.

The 1987 INF Treaty with Russia, signed by President Ronald Reagan and Mikhail Gorbachev, disarmed medium and short range nuclear missiles. Citing alleged Russian violations of the treaty, Trump is taking the lazy way out and crashes out of the pact. But diplomacy has barely been given a chance. Exiting the agreement will not solve those concerns over violations.

See my full commentary at Newsweek:

During the holidays we can’t ignore the starvation taking place overseas in war-torn Yemen. The UN World Food Program (WFP) says 20 million Yemenis are in desperate need of food aid.

We can do something about it like we did after World War II when Americans fed “silent guests” during the holidays.

The “silent guest” plan ran from Thanksgiving through Christmas of 1947-48 to collect donations for hungry Europeans. It was a nationwide program started by activist Iris Gabriel, who got all the governors to endorse her charitable idea.

See my full commentary in the Des Moines Register 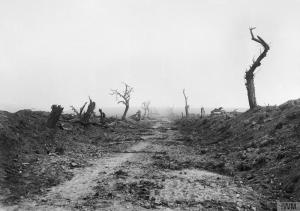 World War One destroyed communities and farmland which led to food shortages.

One hundred years ago, the Armistice of Nov. 11 brought the fighting of World War I mercifully to an end. The U.S. and Allies had defeated Germany and the Central Powers in what was called the Great War.

As we reflect on this history, let’s remember the timeless lessons of war and peace that emerged. World War I showed not only the horror of armed conflict, but its brutal partner: Hunger.

When President Woodrow Wilson addressed Congress about the Armistice, he warned of hunger in the defeated Germany, Austria-Hungary and other Central Powers. Wilson said, “Everything that is possible in the circumstances will be done to supply them with food and relieve the distressing want that is in so many places threatening their very lives… Hunger does not breed reform; it breeds madness and all the ugly distempers that make an ordered life impossible.”

No armistice can be signed against the enemy of hunger. The battle against food shortages continued long after Nov. 11. Herbert Hoover, who coordinated food aid, described how in France “when the curtain was raised at the Armistice, there came into view destroyed cities, homes and farms.”

With farmers displaced from their homes and unable to grow food, famine became the threat. Hoover wrote, “A belt of once fertile land on both sides of the trench lines was so torn that it required years for restoration.”

Americans donated to help feed France and other nations in distress. The Congress also passed appropriations supporting food aid for the war victims.

It’s vital we remember the Armistice and the hunger that followed. The tragic thing is 100 years later there are still nations affected by war and at risk of famine.

The civil war in Yemen has caused the worst humanitarian crisis in the world. Yemen is on the brink of famine. Carolyn Miles, the president of Save the Children, says, “This brutal conflict continues to claim the lives of more than 100 children per day – not just from conflict but also from disease and extreme food insecurity, which have been exacerbated by the ongoing violence.”

The civil war in Syria has destroyed agriculture, which will also take years to recover. Refugees from Syria are scattered throughout the Middle East and with the loss of livelihood they suffer from hunger.

South Sudan, a country with fertile land, has seen its farming industry also devastated by civil war. In the Sahel region of Africa conflict and drought have left millions with food shortages.

All these nations need emergency food aid. Catholic Relief Services, The World Food Program, Save the Children, Mercy Corps and other humanitarian agencies provide life-saving aid with the generosity of donors. As was the case after the Armistice the goodwill of the public through food drives and fundraisers is needed.

With enough funding these nations can rebuild agriculture and grow their own food.

Like after the Armistice, Congress is needed to back humanitarian relief through spending bills. Today’s Congress should increase funds for the Food for Peace program to fight hunger in today’s war and disaster affected nations.

One thing that was done after the Armistice was providing school meals to children in countries impacted by the war. Congress could further support school meals overseas today by increasing funding for the McGovern-Dole Food for Education Program.

With the Armistice came hope of a lasting peace and the end to war and famine. We should never give up on these noble dreams that can inspire us this Armistice (Veteran’s) Day on Nov. 11.

William Lambers is an author who partnered with the UN World Food Program on the book Ending World Hunger.

Originally appeared in the Bakersfield Californian.

When Halloween came around in 1960 John F. Kennedy, while campaigning for president, came across a unique trick or treat event. This ghoulish party was not about collecting candy but instead raising money for the UN agency fighting child hunger and disease-UNICEF.

JFK loved it! Kennedy remarked at a shopping plaza in Willow Grove where the UNICEF party took place, “I think that is in the best tradition of this country’s humane and sympathetic effort.” Kennedy continued speaking about fighting hunger and disease in his short speech.

In fact, when JFK became president he even issued a statement from the White House in support of Halloween trick or treat for UNICEF. Kennedy said “UNICEF has caught the imagination of our people–especially our nation’s children whose Halloween collections have become a symbol of concern and an expression of tangible aid.”

See my full commentary at The History News Network:

World Food Day is celebrated on Oct. 16, but in Yemen people are eating leaves just to survive. A civil war between a Saudi Arabia-led coalition against Iran-backed Houthi rebels has plunged the already impoverished country near(er to) famine.

If we do anything on World Food Day, let’s feed Yemen’s starving population. We must end the war and hunger that is killing civilians. We must ensure humanitarian access to every part of Yemen so people can get life-saving food and nutrition.

All Yemenis are at risk of some calamity in this war. Bombs are hitting homes, schools and hospitals.

See my full commentary in the Albuquerque Journal:

The summit between President Trump and North Korean leader Kim Jong Un comes near the anniversary of one of President John F. Kennedy’s most famous speeches.  JFK, in a 1963 commencement address at American University, proposed to the Soviet Union ending nuclear weapons testing.

If Trump and Kim are wise, they will follow up on JFK’s test ban proposal to strengthen their own peace effort.

Let’s begin with the fact that North Korea has just dismantled its nuclear test site.  Why not take the next step and end all nuclear testing forever on the Korean peninsula and beyond.

See my full commentary at the History News Network

On Saturday, we get a chance to help those less fortunate with the National Stamp Out Hunger Food Drive. It’s the 26th year of the food drive sponsored by the National Association of Letter Carriers.

It’s simple. Just leave canned goods or non-perishable food by your mailbox on that Saturday morning. Spaghetti noodles, canned soup or canned vegetables, rice, peanut butter and other boxed foods are good for donations. Your letter carrier will pick up the food when dropping off your mail. Your donations will then be distributed to local food banks.

See my full article in the Cincinnati Enquirer.

History News Network: The Great Thing The Allies Did as Germany Crumbled

As we remember V-E Day (May 8, 1945) and the Allies victory in World War II Europe, let’s also think of the unsung heroes. For throughout Europe there was another war raging against hunger.

US and British pilots heroically airlifted food into the Netherlands, who were starving under Nazi occupation.

Bizzozero exclaimed, “You would have to go into the schools. Schools are the place to go.” Silber replied, “In that way we could furnish milk to children who need it, and at the same time stimulate school attendance.” Soup and vegetables were also provided to hungry school children in Italy.

This emergency school feeding, which the Allies did throughout Europe, is one of the best ways to help the suffering children of war. It’s a lesson we should well remember because at this very moment children are hungry and missing out on education because of conflict.

See my full commentary at the History News Network.