This Easter, we are in the midst of a horrific global hunger crisis that is fast escalating due to the war in Ukraine. As a major source of wheat, Ukraine is a lifeline for many poor countries. Without access to these precious resources, relief operations are hindered as global food prices continue to climb.

What can be done to address the hunger crisis? To cope with the shortages and higher prices, funding for global food aid programs can be increased. History shows us this can be done if we each sacrifice a little.

That’s what President Harry S. Truman did at Easter in 1946, a year that witnessed another major food crisis in the wake of World War II. Truman canceled the traditional Easter Egg Roll at the White House and cut back on the White House Easter dinner. Such symbolic actions of sacrifice provided an example for citizens to follow. Everyone needed to be involved to save enough food to send overseas to feed the hungry.

My Easter Column in the Free Lance-Star newspaper

It was 70 years ago when President Harry Truman canceled the White House Easter egg roll.

Famine threatened to claim hundreds of thousands of lives because of food shortages in Europe. World War II had left such destruction that famine was inevitable.

Read my full commentary in the Free Lance-Star.

This Easter, spending on candy, gifts, clothing and food is expected to pass $16 billion, according to the National Retail Federation. Even the Easter Bunny would say, “Wow!”

See my full column at the Cleveland Plain Dealer.

Remember the Hungry This Easter 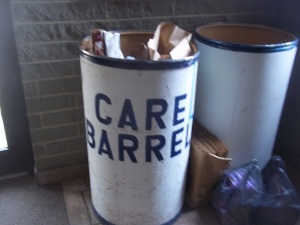 A survey by the National Retail Federation says Americans will spend about 17.2 billion dollars on Easter this year.

Imagine if that spending could be changed, just even a little bit. If one billion of that amount went to global hunger relief it could fund humanitarian emergencies in war devastated Syria, South Sudan, Afghanistan, and Mali and other countries.

At the time of Easter 1946 Americans cut back on festivities in order to help those suffering in countries leveled by World War II. While the hard fought war had been won, the peace had not. Hunger was the enemy that remained. The U.S. Army in Austria, for instance, was helping provide school meals to hungry children.

Americans listened to the plea of President Harry Truman around Easter when he warned, “we cannot ignore the cry of hungry children. Surely we will not turn our backs on the millions of human beings begging for just a crust of bread. The warm heart of America will respond to the greatest threat of mass starvation in the history of mankind.”

Truman canceled the White House egg roll as part of the nationwide effort to conserve food. The Gramercy Boys Club in the Bronx, New York created arm bands with the reminder “Don’t waste food.” They canceled their own Easter Egg hunt and decided to send their candy to the children in Europe. Americans rallied to send as much food as they could overseas whether it was through buying CARE packages or community collections.

The first 20,000 CARE packages of food arrived in France a couple weeks after Easter. In Cincinnati, Ohio firehouses, schools, and food stores served as collection points for a city-wide canned good drive. In May the Cincinnati Enquirer reported the city had sent 10 tons of food off to Europe with more collections to come. One Cincinnati man even donated an entire paycheck to the relief effort.

Herbert Hoover, who led hunger relief after both World Wars, penned the series of books on America’s life-saving efforts called An American Epic. Americans can today can start writing the next volume by their actions in this turbulent time in the world.

War and drought disasters are placing millions at risk of starvation. The conflict in Syria has destroyed food production factories and even if the fighting mercifully ended today it will takes years to rebuild the supply system. Both war and drought have struck at Mali and the Sahel region of Africa. In South Sudan people are living off foods from the wild because of internal conflict and poor harvests. In Afghanistan, very little is told about the hunger that makes about 60 percent of its youngest children stunted in growth. In Haiti, there is still much to be done to fight hunger and help the country rebuild.

Infant children are the most vulnerable to these disasters but a small sachet of the peanut paste Plumpy’Nut, which costs about 33 cents, can save them. It’s a nutrient rich food that some say tastes similar to a Peanut Butter Cup.

Even today there are ways to feed the hungry without spending a nickel. If you go online and play FreeRice you raise money every time you answer a question correctly. If you go to CharityMiles.org you can download a free app and go run, walk or bile to raise money for the World Food Programme or Feeding America. There is hunger within America’s border too with 50 million plus in need.

This Easter nothing could be more important than saving the lives of the hungry. There is more than enough food on the planet for everyone. No more important steps could be taken toward peace than relieving this crushing agony of hunger that afflicts 870 million people around the globe. The message of Easter is to stop that suffering and renew the world.

Imagine Easter with no chocolate or candy or egg hunts. In 1947 in Europe, this was just the case in countries struggling in the ruins of World War II. Newspapers reported a scarcity of everything but faith.

This Easter there will be nearly 1 billion people worldwide suffering from hunger. They are in earthquake-recovering Haiti, war-torn countries Afghanistan, Sudan,  and in the drought hit areas of the Sahel and East Africa.

Developing countries need school feeding programs to fight malnutrition and give their children an education. Not enough emphasis is placed on these vital programs. (WFP/Ramin Rafirasme)

All too often in the discussion of world affairs, the basic needs of food and agriculture are forgotten. Then strategy makers and analysts ponder over how to solve the crisis, often ignoring the obvious. Food supply and accessibility are the foundation all nations need to thrive and have peace.

What needs to change? World leaders need to get more involved in the fight against hunger. Many times their efforts are piecemeal. It’s very important that citizens write their representatives in government about fighting hunger both at home and abroad.

Internet technology offers several ways for people to get involved too. If you visit the sites of the World Food Programme, Save the Children, Feeding America, Catholic Relief Services and others, you will find all kinds of tools and information that you can use to take action against hunger. These agencies want you to get involved and bring your talents and expertise to the table.

What may look dark today can turn around. For Europe’s 1947 Easter, the situation looked quite desperate. But fast forward to the Easter of 1949 and you will find a different tale. Newspapers reported joyful celebrations in Western Europe “from their own labor and the efforts of the European Recovery Program,” known as the Marshall Plan.

This Easter remember the hungry and suffering, and see what you can do to help them.

Article first published as This Easter, Let’s Remember the World’s Hungry on Blogcritics.

Read a newspaper article about the Argosy Easter Ship that help feed children in Belgium during the First World War.