Imagine a mystery guest coming to your Thanksgiving dinner, one you have never met.  Imagine this “silent guest” being a starving person from a war-torn or impoverished country. That is what students at Mount St. Joseph University in Ohio want you to think about this Thanksgiving.

Students of the Mount’s Impact Club (Monica Brucher, Andi Saylor, Courtney Reed and Brittany Hein) are urging everyone to feed a “silent guest” at this year’s Thanksgiving. These students have been holding fundraisers for the World Food Programme (WFP) and trying to get people to join their “silent guest” plan. Where did they develop this idea: From history!

See my full article at the History News Network:

Thanksgiving and the silent guest

This Thanksgiving season take a moment and let your mind wander back to the autumn of 1947. That’s when the Greatest Generation again rose to meet a challenge and help those in need.

They started the tradition of setting aside a plate at the Thanksgiving table for a ‘silent guest,” one of the world’s hungry.

See my full commentary at The Cleveland Plain Dealer.

Invite a ‘silent guest’ this Thanksgiving and help people in need

Former Massachusetts Gov. Robert Bradford was a messenger of hope. It was the Thanksgiving season of 1947 and Bradford, a descendant of the Pilgrims, made a special radio address to the nation.

The governor asked Americans to invite a silent guest into their homes for their Thanksgiving meals. This imaginary “silent guest” would be one of the hungry people in Europe.

See my full commentary at The Seattle Times.

This Thanksgiving season take a moment and let your mind wander back to the autumn of 1947. That’s when the Greatest Generation again rose to meet a challenge and help those in need.

They started the tradition of setting aside a plate at the Thanksgiving table for a “silent guest,” one of the world’s hungry.

See my full commentary at The History News Network

The war in Syria has caused a hunger emergency in the Middle East. On Thanksgiving Eve it was announced that the U.S. Food for Peace program is donating US $125 million to feed the war victims.

Read the full article at Examiner.

This Thanksgiving put an extra chair at your table, and make room for a “silent guest.” That guest can be one of the world’s 805 million hungry people.

Read the full article at The Cincinnati Enquirer

My commentary in the Des Moines Register: Feed a Silent Guest this Thanksgiving

This Thanksgiving, put an extra chair at your table and make room for a “silent guest.” That guest can be one of the world’s 805 million hungry people.

Read the article at The Des Moines Register.

My commentary in the Boston Herald: Feed a Silent Guest this Thanksgiving

This Thanksgiving, put an extra chair at your table and make room for a “silent guest.” That guest can be one of the world’s 805 million hungry people.

Read the article at The Boston Herald.

For Thanksgiving Take in a ‘Silent Guest’

Thanksgiving is upon us. So too is the famous shopping day Black Friday. It’s also the anniversary of a great American initiative. This one started after World War II when Americans fed a “silent guest” at their holiday meals.

It was dreamed up by a former aspiring actress named Iris Gabriel. She gave up on Hollywood only to find her biggest role was in feeding the starving people in the war devastated countries in Europe.

At Thanksgiving on 1947 Americans were asked to imagine taking in one of the world’s hungry to their holiday celebration. They could mail the cost to feed that “silent guest” to a committee in Plymouth, Massachusetts, the home of Thanksgiving. A CARE package was then sent to a hungry person overseas.

The “silent guest” plan was endorsed by governors around the country including Robert Bradford of Massachusetts, a descendant of the Pilgrims.

As this Thanksgiving and Black Friday approaches, there are two huge emergencies ongoing in the Middle East and the Philippines. The war in Syria has left millions displaced and hungry. The colder temperatures are moving in too making relief even more difficult.

The super typhoon Haiyan has destroyed whole communities in the Philippines, leaving them without food, water or housing. The United Nations says 11.5 million people are affected by the Typhoon and 544,606 people are displaced. Food, clean water, medicine and shelter are desperately needed. Hunger, malnutrition and disease will escalate among the population unless aid arrives in time. The storm’s impact can last long past the event itself.

At this very moment Catholic Relief Services is helping provide emergency shelters. This is especially crucial with the risk of more rains coming.

So this holiday season help a ‘silent guest” by donating to a humanitarian agency like Save the Children, Catholic Relief Services, World Food Programme, UNICEF and at your local food bank.

And you can also donate without opening your wallet by using the free hunger fighting app Charity Miles or playing the online game FreeRice.

Thanksgiving and Black Friday should be about sharing. For only by doing so can we have a world of peace, goodwill and hope.

This commentary originally appeared at the Orange County Register newspaper.

FreeRice Can Feed the Hungry on Thanksgiving 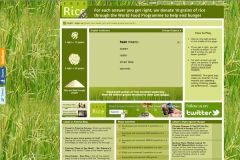 FreeRice has two goals: Provide education to everyone for free. Help end world hunger by providing rice to hungry people for free.

What if on Thanksgiving Day you could share food with a hungry person a world away? What if you could feed hundreds or thousands of “silent guests” on Thanksgiving? Actually you can, with FreeRice, the award-winning online game which helps feed the hungry.

When you play FreeRice you answer questions in many subjects including vocabulary, math, etc. For every correct answer, 10 grains of rice are donated to the UN World Food Programme, the largest food aid organization.

This year I had the opportunity to write some of the questions that appear in the new FreeRice section on world hunger. I have also been encouraged by the response to the game.

Recently, I wrote a story on the great work Ithaca College’s Food for Thought organization has done with FreeRice. This is part of their ongoing campaign against hunger which is highlighted by the Walk for Plumpy’nut.

A College of Mount St. Joseph student, Elizabeth Paff, has been promoting FreeRice as part of an upcoming campus walk event against hunger. The St. John’s Church in Delhi, Ohio told me they are playing FreeRice with some of their school programs.

FreeRice has raised money to feed schoolchildren in Haiti after the earthquake. Currently FreeRice donations are headed to Niger, a country in Western Africa that has suffered a severe drought this year. In addition, Niger is host to thousands of refugees from a conflict in the neighboring country of Mali.

We saw this year how tough drought is and how it can lead to higher food prices. In Niger, where farmers have less technology and means to cope, the consequences of drought multiply. We can throw this country a safety net by playing FreeRice.

So after turkey this year, make some time for FreeRice. By simply playing this game, you can invite a “silent guest” into your home on Thanksgiving, and help feed people a world away in Niger.

Article first published as FreeRice Can Feed the Hungry on Thanksgiving on Blogcritics.