Life-Saving Food Needed in Blue Nile, Sudan by May 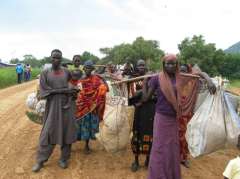 The fighting in Blue Nile Sudan has caused a hunger and refugee crisis with thousands fleeing to South Sudan and Ethiopia. Many others who remain behind in Blue Nile are suffering from food shortages Credit: UNHCR

The UN World Food Programme (WFP) announced yesterday that life-saving food aid is starting to be delivered to the conflict-affected areas of Blue Nile state in Sudan. The government of Sudan had previously blocked WFP from delivering food in Blue Nile.

Blue Nile and South Kordofan have been the scene of conflict since 2011 as Sudan’s government has waged war against rebels who fought with South Sudan during years of Civil War. Thousands have been displaced and fled to South Sudan or Ethiopia. Those who remained have suffered from hunger. There had been reports of people trying to live off roots and leaves from the forest.

To start, WFP is feeding more than 51,000 conflict affected people in Blue Nile. WFP Programme Officer Arduino Mangoni says, “We are giving a two-month ration for this first round of distribution, following an assessment which we carried out early last month in two of the areas most severely affected by the conflict — Geissan and Kurmuk.” The plan is to expand this aid to four other areas of Blue Nile.

Even before the conflict began WFP was providing aid in these areas to 183,000 people. It is now a race against time to provide food in six areas of Blue Nile before the rainy season of May. When the rains come, roads can become impassable making food deliveries difficult or even impossible by truck.

WFP, which relies on voluntary funding, needs US $20.5 million dollars to provide the desperately needed food.