There is a silent crisis unfolding every day in Jordan and throughout the Middle East. It is another devastating effect of Syria’s civil war.

Syrian refugees are falling deeper into hunger. Children are suffering the most, being forced to work and beg to provide for their family.

Read the full article at The Jordan Times.

The chance for food and peace in Syria

For Syria to survive as a nation, they must have food. The farmers must be able to grow and harvest their crops in peace.

But the four-year civil war has destroyed food production, the very heart of any nation. The fighting has left innocent civilians to starve.

That is why the UN World Food Programme (WFP) is calling for a ceasefire throughout Syria. It’s time to put down the guns and defeat the enemy of hunger.

Read the full article at The Hill.

Bread is something many of us can obtain on a daily basis. But in Syria, where the civil war continues to rage, this basic food is scarcely available.

Food and shelter are urgently needed for Syrian and Iraqi war victims. Thousands daily in these two countries are fleeing the onslaught of the terrorist army ISIS.

Syrian refugee children attending school in Iraq will be without a feeding program when classes start next week.

As the war in Syria continues, so does the food shortages. Syrians continue to be blocked from receiving food and other life-saving supplies because of the fighting between Assad’s government and rebel groups.

It’s a small package of food. But for a child it’s a life-saver. The food is called Plumpy’doz. There is another version called Nutributter. Both of these are being distributed in war-torn Syria.

UNICEF, the children’s relief agency, today confirmed it has only received 2 percent of the funding it needs this year to provide aid inside Syria. Three years of civil war has left five million children in need of food, medicine and other humanitarian supplies. 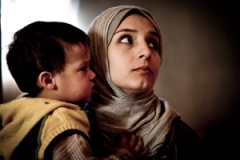 Where there is war there is hunger. In Syria children have died because of chemical weapons, but also because they could not get enough food. Weakened, illness overtook them.

Isra from Syria says, “This war…is killing people slowly. We used up all our supplies of food – I could only give my children one or two mouthfuls of rice to keep them going. I just cried at night.”

The civil war in Syria has created a new enemy for the people: hunger. Syria’s agriculture has been ruined and many bakeries have been destroyed by shelling. The seeds of war have been planted for famine.

The United Nations World Food Program (WFP) is facing its largest hunger relief mission. WFP is trying to feed three million Syrians this month, but faces extreme difficulty in moving life-saving aid because of the violence.

Many people are blocked off from aid by the Syrian government. Save the Children says the numbers of hungry are likely much higher, possibly 10.5 million Syrians in seven governorates alone. Save the Children warns, “As the destruction continues, these numbers will grow: children who once relied on three healthy meals a day will go to bed hungry, afraid, feeling abandoned by the world outside.”

There are also two million Syrians who have fled to Iraq, Jordan, Turkey, Egypt and Lebanon. They totally depend on international aid.

The World Food Program needs about $ US 30 million a week to provide food aid for Syrian war victims. The UN food agency is also trying to feed millions of hungry in Yemen, Afghanistan, Mali, South Sudan, Darfur, Haiti and other countries leveled by conflict or natural disasters.

As the world tries to negotiate an end to the war, we must also press the Syrian government to allow full access to the hungry. In addition, WFP and other aid agencies must have the funding they need to bring relief.

It’s overwhelming for any individual to look at the size of this crisis. But everyone can have an impact, even some of the simplest measures can help. The free smartphone app Charity Miles raises money for the World Food Program. Just going out for a walk, run or bike can raise funds for WFP, which is an agency that relies entirely on voluntary funding. It’s free for you, the funds are donated from a corporate sponsorship pool.

Using this app I have raised hundreds of meals for WFP just by running or walking. I know it’s a small amount, but it’s better than feeling helpless. Laure Chadraoui, a WFP rep working on Syrian relief, told me “What you do makes us all very proud, we need every penny indeed.”

It’s also important to make an impact statement. That’s what needed to keep the focus of leaders in bringing an end to the war and negotiating agreements on humanitarian access. It can help motivate the Congress to pass key legislation like the Global Food Security Act, so hunger remains a top foreign policy priority.

What happens in communities can have a powerful impact globally. In the fall of 1947 people across the USA donated food for the Friendship Train. This outpouring had a powerful influence on Congress as it debated aid to rebuild war-torn Europe.

Senator Arthur Vandenberg said the Friendship Train, “demonstrates our instinct, our tradition, and our impulse to feed the hungry and to heal the sick; and personifies the friendliness which is the genius of a lasting peace.” That holiday season Americans did not stop either, they fed a “silent guest” at Thanksgiving and Christmas which led to more CARE packages for the hungry. The famous Marshall Plan followed and rebuilt Europe from the ashes of war.

Every generation’s horrors can be overcome by its heroes. During World War I collections were held to provide relief in Belgium and other suffering countries. Even after the war people responded to pleas from Herbert Hoover and General John J. Pershing to feed the “invisible guest”: a hungry child. The Motion Picture Industry even held a major fundraiser at the same time.

As Helen Keller once said, “Alone we can do so little, together we can do so much.” Every little bit can go a long way. Understanding this is what makes a leader. Now is the time for action as our generation faces its great challenges in war, humanitarianism and the quest for peace.

Though many families have fled Homs, a few choose to return to their homes in the neighbourhood of Baba Amr despite the challenges. Of those who have fled from Homs to Aleppo,many were later forced to move along when the fighting intensified there as well (photo courtesy WFP/Abeer Etefa)

Life-saving food aid is not reaching hungry Syrians because of the escalating conflict between Assad’s government and rebels. The UN World Food Programme (WFP) said today that “the situation is critical in conflict zones and some opposition-held areas where WFP has limited access and where millions of people are believed to be in acute need of food.”

WFP is urging the warring parties to allow food aid to pass safely into conflict zones. The hardest-to-reach areas include parts of rural Damascus, Quneitra, Dara’a, Deir Ezzor, Al-Raqqa, and the north of the country, particularly Aleppo and Idlib.

Muhannad Hadi, WFP’s Regional Emergency Coordinator for the Syria crisis, says, “It has become a struggle now to move food from one area to the other with our warehouses and trucks getting increasingly caught in the crossfire. We are sometimes left with the difficult decision of calling off the dispatch of food to a place where we know there is dire need for it.”

WFP lost some food when a mortar struck one of its warehouses. The UN food agency is trying to feed 2.5 million Syrians this month inside the battered country.

Funding problems as well as violence plague the relief mission. WFP relies on voluntary funding from governments and the public. Funds are needed to feed not only the at least 2.5 million Syrians inside the country, but also the close to a million refugees who have fled to Jordan and other neighbors.

WFP has already started to bring Plumpy’Doz, a food that fights child malnutrition, into Syria. As the conflict continues, more and more Syrian children will be at risk of lasting physical and mental damage, or even death, from the malnutrition in the country.

WFP has set up a relief fund for Syria.

Article first published as Millions of Syrians Desperate for Food Aid on Blogcritics.