President John F. Kennedy’s speech on hunger at the World Food Congress in 1963. See the video on YouTube.

Excerpt of General Dwight Eisenhower’s July 8, 1948 speech for a United Nations Crusade for Children. Eisenhower talks about the importance of ending child hunger in the quest for peace, a theme still very much relevant today. View the video on Youtube.

Food and shelter are urgently needed for Syrian and Iraqi war victims. Thousands daily in these two countries are fleeing the onslaught of the terrorist army ISIS.

Recognizing the growing humanitarian emergencies around the world, members of the House and Senate are proposing increased funding for the International Disaster Assistance Program (IDA). Drafts of spending bills that boost IDA funding have been approved in both chambers.

The Christmas Carol that Fed the Hungry 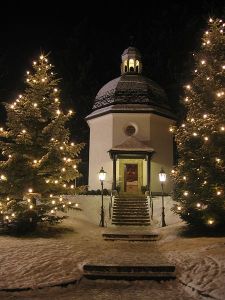 Many winters ago in a tiny village in Austria, the Christmas Carol “Silent Night” was born. In a small church in Oberndorf, the song of peace and heavenly love was first played.

Peace would not last though in the land of music. The World Wars came. The destruction was massive. Even after World War II ended there was still suffering among the people. They were without food.

Austrian children could not even grow because it was hard finding one meal a day. Without enough nutrition the next generation cannot develop or learn. They cannot make music.

The U.S. Army, Catholic Relief Services, UNICEF and others brought food to Austria for war recovery. Meals were distributed at schools. They tried to bring life back to normal. No easy task. Times would be tough with a major drought in 1947, limiting food supplies.

Then “Silent Night” came to the rescue. It was the holidays of 1948 when a woman in New Jersey suggested that every time someone heard “Silent Night” on the radio they donate a meal.

This idea was adopted as part of a holiday program, started the year before, where people bought CARE packages for those in need. These parcels of food were sent to Austria and other nations. 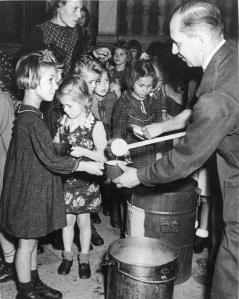 Like the Christmas Carol that spread worldwide, so too did this plan of feeding the hungry. The holidays could truly be about sharing.

This food made a world of difference for the countries who had lost just about everything during the war.

With food, a people and a nation can bounce back. Only when hunger is beaten, can there be peace. That is the message of “Silent Night.”

Today, Obendorf and its peaceful church lit up at night is a symbol of the peace of Christmas, the “Silent Night.” The war and its starvation are long past. Yet, a world away, at another place of worship, there is a different tale.

In the Central African Republic people flock to the church to stay alive and find food. Violence has erupted there among rebel groups. People are constantly on the run for their lives. Their possessions are lost. Farmers can no longer plant. So hunger and poverty now increase.

They depend on security from UN peacekeepers and the World Food Program to bring them life-saving rations. But that is only if there is enough funds from the international community to feed them.

When you think of Christmas, the holidays, and “Silent Night” think of the Central African Republic. Think of the food and peace they need to overcome conflict and build their society.

Think also of the flood of Syrian refugees into Lebanon. They have escaped the civil war in their country only to find a new enemy: winter. They just want a roof over their head and warm meals.

What more noble act could be done this holiday then to feed the hungry war victims? Or to bring food and shelter to those in the storm hit areas of the Philippines and other countries. The World Food Program, Catholic Relief Services, Save the Children, UNICEF and many others struggling to bring relief to so many areas in need.

School Meals for Peace in Mali and Burkina Faso

As Congress gets back to work on the Farm Bill, it’s vital they support the Food for Peace and McGovern-Dole programs. Both initiatives fund school meals around the world in partnership with charities like Catholic Relief Services.

In Austria, after World War II, CRS teamed with the U.S. Army and UNICEF to give school meals to children. More recently CRS has been organizing school feeding in Mali and Burkina Faso, two nations suffering from extreme poverty in West Africa.

Mali has been struck by conflict in the North and a nationwide drought. Food production is reduced across the country. The UN World Food Programme says, “69 percent of the population lives below the national poverty line, and according to 2010 National Statistics, more than one-fifth of school-aged children do not attend school.”

A report from the Famine Early Warning System shows that “north of Kayes and in some parts of the Mopti, Koulikoro, Ségou, and Timbuktu regions, rain shortages have affected crop development, which will likely reduce yields at these locations.” Hunger is a growing problem in Mali and aid is desperately needed.

CRS provides school meals in the Mopti and Koulikoro regions to help families cope with the crushing strain of poverty. The meals are funded by the U.S. Dept. of Agriculture’s McGovern-Dole program, named after former U.S. senators George McGovern and Bob Dole.

CRS is reaching around 80,000 children in Mali with this food. Children can count on a hot meal of rice, peas and vegetable oil every day at school. When your family is struggling for food, this is an absolute treasure.

Without that food, many students would not eat a square meal at all. It motivates parents to send their children to school, especially girls, and means the children are able to grow, develop, and maximize their learning potential. It really is essential.

In Mali, CRS also has an initiative where local farmers provide the school meals. This is key because the goal is for each country to be able to run its own school feeding. CRS helps form School Management Committees. Fairs are established where farmers can bring their crops, which are inspected to ensure quality. The School Management Committees then purchase foods from the farmers to use for the meals.

Students and parents were very pleased with the taste and content of the local school meals, and the School Management Committees’ capacity and sense of ownership increased significantly.

McGovern-Dole and CRS are feeding 145,000 children in 688 schools and 28 preschools. Take-home rations and de-worming are also provided. Burkina Faso has suffered from drought and also the strain of hosting refugees from the war in Mali. The country has high poverty and very low literacy rates. Support for education is extremely vital.

The U.S. Food for Peace program is also funding CRS to feed another 40,000 children in primary school. There are also 700 children in preschool who receive meals. Take-home rations are given to 4500 girls with rates of attendance. The food is a powerful incentive for attending school. The Food for Peace plan is to help Burkina Faso as it develops more capacity to take over the school feeding.

Local production of food is also part of the Burkina Faso plan. CRS and the U.S. Dept. of Agriculture combined on a local purchase project that fed 58,000 children. Cornell University helped with monitoring and evaluation.

The future of these school feeding projects will rely on funding that will be determined, in large extent, in the next Farm Bill. It’s important citizens let their representatives in Congress know about funding the Food for Peace and McGovern-Dole programs.

Japan’s Generosity-6 months after the earthquake

Japan has long been a major donor to the UN World Food Programme. Here is a photo of 2009 meeting announcing a donation to WFP operations in Tajikistan (WFP/Zia Ziauddin)

While Japan has faced enormous challenges since the earthquake struck one thing has not changed-their generosity. Japan continues to be a leader in fighting global hunger as evidenced by a recent donation to the UN World Food Programme. Around 400,000 impoverished families in Bangladesh will benefit from a September donation of 10 million dollars.

H.E. Mr. Tamotsu Shintosuka, Ambassador to Bangladesh says, “We hope the assistance will help poor people of Bangladesh who are the victims of natural disasters and climate change. We are pleased to assist WFP with this donation to help the poorest, most vulnerable and undernourished people of the country.”

Japan continues to reach out to help others countries just as they are rebuilding on the homefront. The charity Save the Children is in Japan providing relief supplies and helping kids deal with the trauma of the last 6 months. One mother remarked to Save the Children staff, “You have made my child smile again.”

Read an article in the Korea Times about Japan’s recovery and Save the Children’s work there.

Listen below to an audio message from Save the Children’s president Carolyn Miles.

Save the Children Reports from Japan- 6 Months after the Earthquake

Tagged as Bangladesh, Japan, Save the Children, World Food Programme