My Pensacola News Journal Oped on Stamp Out Hunger

What if we had the power to end hunger in America? We could bring a source of stability and hope to every community.

On Saturday, we have this chance with The National Stamp Out Hunger Food Drive.

You are asked to leave nonperishable food next to your mailbox. These would be items liked boxed cereals, rice, pasta and other foods that have a long shelf life.

Read my full commentary in the Pensacola News Journal:

Filed under Hunger in America, Uncategorized 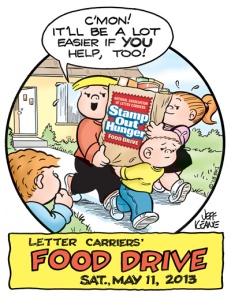 The Stamp Out Hunger Drive takes place Saturday, May 11th. You can leave canned goods out for your letter carrier to be picked up and delivered to local food banks. Credit: Stamp Out Hunger

On Saturday, May 11, Americans can send a powerful message about ending hunger by taking part in the Stamp Out Hunger Food Drive. Leave non-perishable canned goods by your mailbox that morning, and they will be picked up by your letter carrier and distributed to local food banks.

Hunger is a silent but massive crisis facing over 50 million Americans. Lines of people are gathering at food pantries, which they depend on to get through difficult times. We have to make sure that food banks have enough supplies to meet the increasing demand.

The Stamp Out Hunger Drive offers a quick and easy way to support the food banks.

But more is needed. Congress must also be sent a message. Over the course of a year food banks cannot get by solely on the generous donations they receive from the community. They also need the help of the Federal Emergency Food Assistance Program (TEFAP).

Over 1,300 hunger relief agencies recently sent a letter to Congress urging support for TEFAP in the upcoming Farm Bill legislation. The letter stated that TEFAP “has not kept pace with growing demand and “has actually declined recently, making it difficult for the program and food banks to keep up with demand…In 2012, more than half of Feeding America food banks experienced declines in TEFAP [of] more than 40 percent.”

Congress has to get its priorities in order when making budget decisions. The American people can let them know that funding TEFAP is essential to holding the fort until we can get some significant economic recovery.

On May 11, the National Food Drive offers you a chance to feed the hungry in your community and send a powerful message to Congress that eradicating hunger needs to be a priority.

The Stamp Out Hunger Drive: Helping to End Hunger in America

This Saturday provides an opportunity to end hunger in America, and it all starts at your mailbox. The National Association of Letter Carriers and the Campbell Soup Company are sponsoring the Stamp Out Hunger Drive. This Saturday, May 12th, citizens are asked to put out canned goods (non-perishable items) by their mailbox. The food will be collected by their mail carrier and then distributed to foodbanks.

Sarah Cook of the Cincinnati Freestore Foodbank says that last year Stamp Out Hunger donations produced enough food for 80,000 meals provided to the area’s hungry. Denise Gibson of the Ozarks Food Harvest said 131,000 pounds of food were donated by citizens of Southwest Missouri via Stamp Out Hunger.

Terry Shannon, the President of the St. Mary’s Food Bank Alliance in Arizona says Stamp Out Hunger raises “Between 350,000 and 400,000 pounds (of food). It is the largest one day food drive for the food bank.” St. Mary’s provides aid throughout Arizona including supporting summer feeding for children in Maricopa County. The agency also assists Apache County, which has a 28% food insecurity rate, one of the highest in the country.

Dan Getman of the Food Bank of South Jersey said the event last year produced 119,550 pounds for their agency to distribute. Getman adds that Campbell’s Soup is sending out collection bags to homes in South Jersey to encourage donations.

Foodbanks all across the country need help as there are nearly 49 million people suffering from hunger.

The collection of canned goods can provide some quick relief especially at a time of the year when donations are generally down as compared to the holidays.

There is one extra thing Americans can do via the Stamp Out Hunger Drive. You could send a letter or an e-mail this Saturday to your representative in Congress asking them to fight hunger. You can remind them of the need to support the nation’s foodbanks as you will be doing on Stamp Out Hunger Day.

Balduff adds that the event “also comes at a time when one of our federal partners in hunger relief, the U.S. House of Representatives, could vote on May 10th to cut SNAP/food stamp benefits by an average of $57.00 for a family of four by September 2012 (H.R. 4666)…Caring Ohioans do their part to end hunger, we need our federal partners to do the same.”

You can also ask your representative to take steps to improve the nation’s school feeding program, particularly during the summer months when many hungry children are not able to access school meals.

Ask your representative to pledge to fight hunger in America and also abroad where children are starving in Africa, Afghanistan, Yemen and other areas. Your elected officials can follow a tradition of Truman, Eisenhower and other leaders who supported ending hunger.

So this Saturday’s Stamp Out Hunger Drive can be a great success. By donating canned goods you can provide quick relief to our nation’s foodbanks as they struggle to keep up with the growing hunger crisis in America. Via a simple letter you can ask your elected officials in Congress to represent you and your desire to end hunger in America and all over the globe.

Article first published as The Stamp Out Hunger Drive: Helping to End Hunger in America on Blogcritics.