Video: Herbert Hoover addresses the nation about global hunger on May 17, 1946

Herbert Hoover addresses the nation about global hunger on May 17, 1946. See the video on YouTube.

Excerpt from a United Newsreel report of Herbert Hoover returning from world tour as the food ambassador to fight hunger. See the video at YouTube.

This Day in History in the Fight Against Global Hunger

Winston Churchill once said, “The further backward you look, the further forward you can see.” As President Obama is set to make a speech about today’s global hunger crisis, it helps to look back on this day in history.

On May 17, 1946 Herbert Hoover addressed the nation as famine threatened to strike the countries devastated by World War II. Hoover had been appointed as a “food ambassador” by Harry Truman. Hoover set out to coordinate the global response and millions of lives were saved by this effort. As Hoover put it, the  world had to come together to master the famine.

The citizens of America responded, sending CARE packages and even having trains cross the country collecting food for the hungry. The recovery program for Europe after the war, known as the Marshall Plan, was built on a foundation of food and nutrition.

We face a new hunger crisis today, as conflict in Sudan, East Africa, the Sahel region of Africa, Yemen, and Afghanistan has escalated the ranks of the hungry. Also, drought has descended in many of these areas which has ruined food production. Children are dying from malnutrition.  Right now aid agencies lack the funding to keep up with the crisis.

Peace in these countries depends on whether there is enough food supply and nutrition, especially for the smallest children. If enough funding is provided, millions of children in these countries could be spared death or damaging malnutrition.

Peace is advanced if we save the children. This we know. Still, history gives hope that the world can respond to the threat of famine today. On this day in history the Greatest Generation was focused on defeating the last enemy of World War II: Hunger.

Listen to Herbert Hoover address the nation on May 17,1946 about the famine after World War II.

Read more about President Obama’s speech on global hunger at the Global Agriculture and Food Security Symposium on May 18th.

Article first published as This Day in History in the Fight Against Global Hunger on Blogcritics. 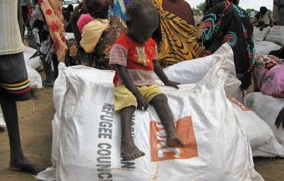 This child in Sudan is receiving food aid from the Norwegian Refugee Council (NRC). Many more children in the world are in need of food safety nets. (NRC Sudan photo)

The book is a great history of the World War II era and the fight to save millions from starvation after the fighting had ended. It tells a story not often covered in the histories of this time period.

But I think the book represents more than an outstanding history. It’s something we can learn from in today’s struggle to win peace.

When I saw Hoover’s book a few years ago, I asked: Why not have something like this today? Why not have a country-by-country look at all-important child feeding? I felt this was not being covered enough in the news. The “silent tsunami” of high food prices had struck and the number of hungry children worldwide was fast growing.

So I contacted Jennifer Parmelee of the UN World Food Programme (WFP) in Washington, D.C. I presented my idea and it took off from there. It led to the creation of an interview series covering school feeding programs worldwide and then the book Ending World Hunger.

Laura Sheahen of Catholic Relief Services/Caritas also was very instrumental in helping develop the series. The feature continues online at Blogcritics today with its most recent update including the Norwegian Refugee Council providing school meals in the Democratic Republic of the Congo.

The idea is to bring the issue of child hunger into the spotlight and talk about solutions, and to connect the issues of hunger and nutrition to the pursuit of peace and development. This is something American Epic does.

A school meal program for Germany saved that country after World War II and it can do the same for others today.

Yet hunger has not been made enough of a priority and low funding plagues relief operations in Afghanistan, Yemen, Ivory Coast, Haiti, Sudan, and other nations. In East Africa, critical months lie ahead in saving the region after the massive drought last year.

In Sudan food is vital to the peace process. Whether it’s the nutritious peanut paste plumpy’nut (or plumpy’sup for malnourished infants), food for school age children, or agricultural development, it can mean the difference between peace and conflict.

Currently, low funding for the United Nations World Food Programme (WFP) has led to reductions in its school feeding for Afghan children. In Benin, WFP is able to feed only 64 percent of children in the school feeding program. The funding shortages again limit the reach of the program.

There is a lot more that can be done to fight hunger around the globe.

Hoover’s American Epic showed what a food ambassador could do to rally cooperation, both domestically and internationally, for fighting hunger, and why it’s so important that child feeding programs get the support they need. Nutrition matters.

As Hoover said, “Civilization marches forward upon the feet of healthy children. We cannot have recovery of civilization in nations with a legacy of stunted bodies or distorted and embittered minds.”

I think the Congress needs to think of this when they are drawing up the new budget. Think of what the consequences will be of reducing U.S. international food aid – what that will mean for future generations, and what it will mean for our prospects for peace.

I think that is a key lesson to take from Hoover’s American Epic.

Remembering the Horn of Africa This Holiday Season 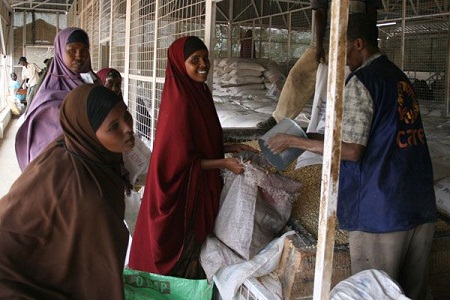 The UN World Food Programme and CARE team up to provide food to refugees who have fled Somalia (WFP/Mariko Hall). Both of these agencies are accepting donations for East Africa.

President Obama issued a statement last week thanking Americans who had donated to relief efforts in the Horn of Africa this year. He also cautioned that much more needs to be done to overcome the humanitarian tragedy of 2011.

Obama said, “As we enter the season of giving and renewal, more than 13.3 million people in Ethiopia, Kenya, and Somalia remain in urgent need of humanitarian assistance amid the worst drought the region has seen in 60 years. The heartbreaking accounts of lives lost and of those struggling to survive remind us of our common humanity and the need to reach out to people in need.”

The U.S. has a great tradition of leading the fight against famine wherever it occurs. In 1946, just a year after World War II ended, the threat of massive famine loomed over the globe as food supplies were running low. In this case, the paths of the U.S., Somalia, and Ethiopia crossed briefly.

Herbert Hoover, who was appointed food ambassador during this crisis, first reviewed the food supply of as many nations as possible. In this report were listed Somaliland and Ethiopia. Hoover writes “of self-sufficient nations in Africa, we classified Egypt, Ethiopia, Liberia, and Somaliland, with a total population perhaps of 35,000,000 people.”

There were no reports of drought that year in East Africa. Of course, any country not in food deficit at that time was a huge relief with the impending worldwide famine. It was going to be enough of a challenge to meet the food needs of the war-devastated countries.

Whether or not there is a drought is all about luck. In 1946 there was luckily none in East Africa. This year a different story–a huge drought.

What does not depend on luck though is how well nations are prepared to deal with drought. Many actions can be taken by the international community to help build up the resilience of farmers in developing countries so that when drought does hit, it is not catastrophic. Food reserves can also be in place to prevent a year of setbacks from drought and keep a country moving toward food security.

So, this is one of the lessons of this year. Invest in farmers today to avoid the famine of tomorrow.

Article first published as Remembering the Horn of Africa this Holiday Season on Blogcritics.