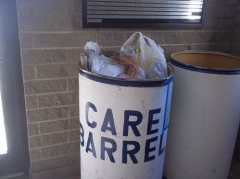 This week I have a letter in the New York Times on fighting hunger in America. As President Ronald Reagan said, “If even one American child is forced to go to bed hungry at night, or if one senior citizen is denied the dignity of proper nutrition, that is a national tragedy.”

The need for public donations and a strong federal emergency food assistance program (TEFAP) has never been greater. Matt Knott, the president of Feeding America, says, “We have seen a tremendous rise in the number of people coming to the food pantries, soup kitchens and other emergency feeding centers served by Feeding America food banks since 2007, including many middle class families seeking assistance for the first time.”

Yet funding for TEFAP is not keeping up with the demand created by these difficult economic times.

Ohio, an election battleground state, has been hit hard, with 15.5 percent of its population facing “food insecurity” and 6.4 percent facing “very low food security,” “meaning that the food intake of one or more household members was reduced…because the household lacked money and other resources for food.”

Lisa Hamler-Fugitt of the Ohio Association of Foodbanks says, “Our hunger relief network is strained, and state and federal programs face the risk of funding losses that cannot be overcome.”

Kurt Reiber, president of Cincinnati’s Freestore Foodbank, says, “we have seen a drop off in the amount of food that we receive through the USDA’s TEFAP program this year as compared to prior years.”

Hunger forces families into difficult decisions. A Feeding America study showed that “34 percent of client households report having to choose between paying for medical bills and food.” It can create a spiraling effect of destruction for individuals, families, and entire communities. Health, educational performance, and work production all can suffer as a result of hunger, making it much harder for recovery.

With food prices expected to rise next year, this will put even more strain on those already in poverty. It will become more difficult for food banks to acquire a supply to help those in need.

Despite this alarming hunger crisis, Congress is also planning reductions in food stamps which will eliminate free school meals for nearly 300,000 children in the U.S. School meals have been a safety net for children for decades and help boost learning. To lose them now would be catastrophic to America.

What can be done? Citizens can help by supporting their local food banks and many of their programs, including weekend backpack food programs for schoolchildren. Citizens can also write to their representatives asking they support hunger-fighting programs like TEFAP and food stamps.

Making your voice heard through words and actions is essential to ending the national tragedy of hunger.