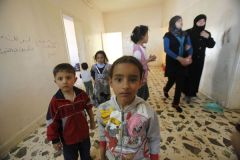 Even before the violence broke out in Syria, a food security survey found that 1.4 million people were struggling to meet their daily food needs. Many lived in areas currently affected by conflict. (WFP/ Salah Malkawi)

The UN World Food Programme (WFP) says its facing a “critical funding shortfall” of US $62 million dollars as it tries to feed victims of the conflict in Syria. The UN food agency depends entirely on voluntary donations from governments and the public.

WFP just sent aid to Aleppo, the largest city in Syria, after reports of food shortages following an increase in fighting between the Syrian government and rebels. A WFP press release says, “The humanitarian situation is deteriorating in Aleppo and food needs are growing rapidly, with heavy fighting entering its second week – forcing about 200,000 people to flee the city. ”

Working with the Syrian Red Crescent, WFP provided food aid to over 500,000 war victims during July. However, the violence in the country prevented WFP from reaching its target goal of 850,000 Syrians. A recent report also reveals that three million Syrians will need help during the coming months.

The fighting has taken its toll on the livelihoods of families, many of which were already at poverty level. Abdulla BinYehia of the UN Food and Agriculture Organization (FAO) says, “The most vulnerable families in Syria depend entirely or partly on agriculture and farm animals for food and income. They need emergency support, like seeds, repairs to irrigation systems, animal feed and healthcare.”

BinYehia warns, “If timely assistance is not provided, the livelihood system of these vulnerable people could simply collapse in a few months’ time. Winter is fast approaching and urgent action is needed before then.”

The White House released a statement this week highlighting a 12 million dollar donation of additional humanitarian aid to Syria. This donation will be distributed among various aid agencies working inside Syria including WFP. So far this fiscal year the US has donated 27 million dollars to the WFP relief operation in Syria. Many more donations are needed as there is no end in sight for the conflict.

WFP is also feeding a growing number of refugees who have fled to neighboring countries. There is expected to be well over 100,000 Syrian refugees in Iraq, Turkey, Lebanon and Jordan by the end of this year.

Suggested by the author: