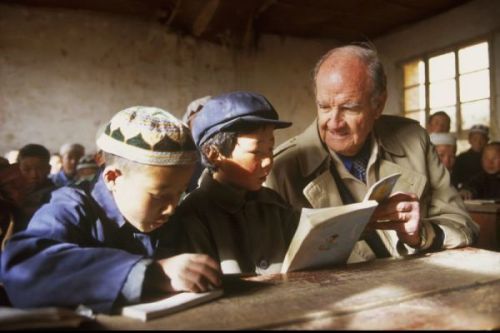 Former Democratic senator George McGovern’s The Third Freedom: Ending Hunger in Our Time highlights ways Congress can work to fight malnutrition at home and abroad, and why it’s so important we win this struggle against hunger.

His book takes on special meaning right now as Congress is proposing reductions in funding to food aid programs both here and abroad.

McGovern, who ran for President in 1972, was the Food for Peace director under President  Kennedy. This program sends U.S. food overseas to fight hunger and build stability.

McGovern also has a long track record helping feed the hungry in the United States. In a Friends of the World Food Program teleconference, the question was once posed to him: why fight hunger abroad when there are hungry people here? His reply was: Why not do both? Fight hunger whether it’s in the US or overseas.

In The Third Freedom he talks about the Food for Peace program which was supported by both President Dwight Eisenhower (a Republican) and then Democratic President John F. Kennedy. Since then, it has been the main weapon of the U.S. against world hunger.

Food for Peace though is currently at risk of significant budget cuts by Congress, despite the fact that there are tremendous hunger crisis points such as famine in East Africa, drought ravaging Afghanistan, and nations like Haiti who need food to bolster reconstruction.

The charity Save the Children says the House of Representatives is proposing $1.04 billion for Food Peace in the upcoming FY 2012 budget, a significant dropoff from this year’s funding level of nearly $1.5 billion.

One of the key bipartisan initiatives discussed by McGovern in the book is the McGovern-Dole global school meals program. Along with Republican Senator Robert Dole, McGovern developed this initiative.

McGovern-Dole funds school meal projects in developing countries. The UN World Food Programme, Catholic Relief Services, World Vision and other charities provide meals using McGovern-Dole funds. This program is among those at risk in current budget discussions in the Congress.

McGovern also writes about bipartisan congressional committees, which helped improve the U.S. domestic school lunch program. Today’s representatives need to keep up the fight to ensure needy children in the U.S. can access food. For instance, school lunch and summer feeding program enhancements made by McGovern and his colleagues in the Congress need to be followed through by the current representatives.

The bipartisan cooperation that McGovern writes about is especially critical as hunger rates in the U.S. are rising. Vicki Escarra, President of Feeding America says: “The need for food assistance has increased dramatically during the prolonged and severe recession. Hunger hits every state and county in America, with one in six people facing food insecurity… strong federal nutrition assistance programs will continue to be essential.”

Funding for domestic and overseas food aid is very much on the line currently in Congress. McGovern’s book offers hope in this difficult period by reviewing past achievements in the struggle to end hunger. At the same time, he is looking forward to what should be done next to defeat man’s ancient enemy

Originally published as McGovern’s The Third Freedom: Ending Hunger in Our Time is Essential Reading as Congress Debates Food Aid at Blogcritics Magazine