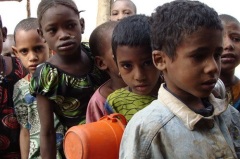 During the Sahel drought of 2012 children at the Tin-Ediar school in Burkina Faso line up for meals provided by the World Food Programme. The children are provided breakfast and lunch at school. (WFP/Anne Poulsen)

Many of us have seen drought at one time or another. Last summer a severe one scorched across much of the United States. The impact is hard, but imagine if you are a poor family in a developing country, dependent on crops for income and food. When drought strikes it destroys your food supply and you have almost nothing to fall back on.

This is what happened in the Sahel region of Africa last year when massive drought struck. The UN World Food Programme (WFP) in Burkina Faso says this caused many families to move to mining zones to find work. Their children would have to work too, meaning they would have to drop out of school.

WFP, though, had a school feeding plan to help families deal with the shock of drought and to keep the children in class. Last year in Burkina Faso, one of the Sahel countries, WFP fed 91,783 children breakfast and lunch at school and some girls received take-home rations. When food becomes scarce and high-priced as it did in the Sahel last year, food at school becomes a life-changer.

Burkina Faso had another emergency besides drought. The war in Mali created a number of refugees, some of whom fled to Burkina Faso. Ariane Waldvogel, the WFP deputy country director for Burkina Faso, says, “Malian refugee children were absorbed into local schools and received school meals…This assistance was key in not only improving the food security of the refugee children but also played a role in keeping relations between refugee and Burkinabé host communities peaceful.”

As 2013 unfolds school meals are still vital in Burkina Faso and throughout the region. School attendance in Burkina Faso’s Sahel region as a whole is low. WFP wants to expand its program to reach 100,000 children this year as it continues to help Burkina Faso recover. In time this program can help build a national school meals program, such as we have here in the United States.

WFP depends on voluntary donations, though. They need about U.S. $4.1 million to provide the meals this year. Some funding has been received from Switzerland and the United States.

Waldvogel says, “The additional US $1.7 million are urgently required to enable WFP to purchase and deliver food in time to ensure that school children resume school in October and continue to receive their two meals a day. Multi-year funding would be ideal for this programme, providing a steady funding stream, which would allow WFP to provide constant school feeding assistance throughout the academic year.”

The U.S. McGovern-Dole program, which funds school meals in developing countries, would be a great resource for Burkina Faso. It’s important that the U.S. Congress not reduce funding for this program as stipulated by the Sequester. School meals play a critical role bring stability throughout the world in areas impacted by drought and conflict. There is no better example of this than in the Sahel region of Africa.