The Candy Bombers is More Than A History Lesson 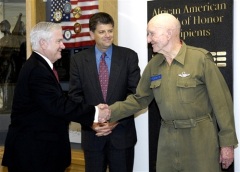 At at time when budget cuts by Congress threaten aid to the needy overseas, The Candy Bombers brings history to life while offering lessons for the present. By Andrei Cherny, it tells the story of the Berlin Airlift of 1948, during the early years of the Cold War. After the guns of World War II fell silent Germany lay in ruins and was occupied by the Allies and Soviet Russia. The capital city of Berlin rested deep inside the Soviet-held area of Germany.

In June, 1948, the Soviets cut off ground access to Berlin, which meant no supplies could get in. What would America do? Using force to get the supplies in meant the threat of World War III. A retreat from Berlin, and allowing the Soviets to take over, would be a disaster.

Instead America chose to airlift supplies into the city. The book tells about how this plan came into action and how it saved Berlin from starvation. It also tells a tale of what the Berlin Airlift meant to children who received magical air drops filled with candy from American planes.

German children who were terrified of American planes during the war now celebrated them. A letter from one child read: “Suddenly we saw about ten white parachutes coming out of the sky! One of them set down at the roof of our house. There were three stripes chocolate in the parachute. My sister, mother, and grandma were very glad about the chocolate too! I want to thank you for your love to the German kids.”

The book is not just about telling the history of major event of the Cold War. It reminds people to apply past to present, at a time when we need some guidance and leadership. The introduction of the book tells about how when the 9/11 disaster struck there was such sadness and outpouring of support for America coming from Berlin. They remembered when America came to their aid after the war. As one woman, who was a child during the Berlin Airlift, said, ” I love Americans.”

America sent food, CARE packages, school meals, reconstruction projects through the Marshall Plan all along months of Berlin Airlift supplies. These acts saved Germany, changed the world and remind us that peace is obtained through reaching out a helping and caring and giving hope.

Article first published as The Candy Bombers Is More Than a History Lesson on Blogcritics.