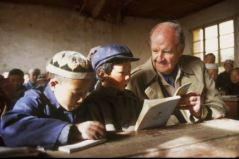 George McGovern passed away Sunday at 90 years old. He ran for President against Richard Nixon in 1972 and was a senator from South Dakota. But I remember him first for a book he wrote in 1964 called War Against Want: America’s Food for Peace Program.

I ordered a copy from Amazon.com one day in 2006 after taking a leadership course at the College of Mount St. Joseph. Up until that point I really had no idea what Food for Peace was or very much knowledge about global hunger in general. What better introduction than War Against Want. Ever since getting that book, I have been writing about hunger issues.

In 2008, the Friends of the World Food Program held a teleconference with McGovern. I got the chance to talk with him and he told his story of how influenced he was by his experiences as a bomber pilot in World War II. He saw hunger in the war-torn countries and that planted the seed for him becoming an advocate for the needy.

McGovern was a leader who emerged from a World War II generation that understood how powerful a force hunger is in international relations. This wisdom helped the Greatest Generation navigate the treacherous waters of the post-war world.

When McGovern became the Food for Peace director in 1961 he hit the ground running and led a big expansion, especially with school feeding. Children in South Korea, Brazil, India, Poland and other countries received school meals during McGovern’s tenure. These countries are now donors to food aid.

The U.S. Food for Peace program led to the creation of an international version which is today known as the UN World Food Programme (WFP). McGovern was the one who got the ball rolling on this initiative, now the largest food aid organization in the world. The U.S. Food for Peace program is the single biggest donor to WFP. So the two programs work hand-in-hand in the global effort to end hunger.

McGovern remained active in fighting hunger even long after his days in government. He served as a goodwill ambassador for WFP. Josette Sheeran, the WFP director from 2007-2012, said: “I have treasured knowing him and feeling his incredible support.”

In 2000, an international school meals program was started by McGovern along with Senator Bob Dole. The McGovern-Dole program has fed millions of children in Haiti, Afghanistan, Yemen, Bangladesh and other locations. Each year McGovern-Dole grants are awarded to WFP and other hunger fighting organizations so they can provide school meals in developing countries. If you want to pay tribute to McGovern a great way would be to advocate for this program to be expanded. What better way to reach out to the world than through school meals?

As WFP’s current director Ertharin Cousin says, “George McGovern saw – way before anyone else – how the simple, sustained act of putting a meal in the hands of a poor child at school could change that child’s life and give them a chance at a better future.”

McGovern also was a leader in building the U.S. national school lunch program including summer feeding. At a Friends of WFP teleconference someone asked whether hunger should be fought first at home before going abroad. McGovern replied: Why not do both? There are after all enough resources in the world to reach all hungry people. Why give any quarter in the fight against hunger? He certainly did not.

While McGovern has moved on, his legacy remains, and also his spirit. You can see this when new advocates for ending world hunger emerge, ready to build on the foundation he left. McGovern’s story, in that sense, is far from over.