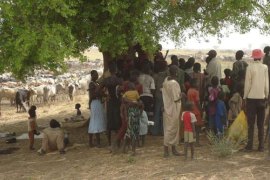 file photo of members of the Lou Nuer gather under the shade of a tree in Ethiopia after fleeing from South Sudan’s Jonglei state. (Credits: UNHCR/S.Tessema)

The United Nations reports that heavy rains and flooding have affected 125,000 people in Jonglei, the largest state in South Sudan. The flood victims are in desperate need of food, medicine and other aid but roads are impassable preventing the delivery of supplies. The UN says it will use a helicopter to access the hardest-to-reach areas.

Meanwhile, 4500 people have been displaced from Likuangole town after fighting between South Sudan’s army and a rebel group. Aid groups have yet to reach the victims according to the latest report from the UN.

In the past year Jonglei has suffered through natural disasters of flooding and drought in addition to conflict among rival tribes. Major fighting has take place between the Lou Neur and Murle tribes. The government launched a disarmament campaign earlier this year but the latest fighting shows this initiative is a long way from completion.

The recent disasters will escalate the hunger crisis in the already devastated country. The UN World Food Programme has estimated that at least 4.7 million could suffer from hunger in South Sudan this year.