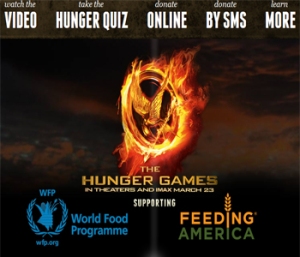 Earlier this year former senator Chris Dodd, chairman of the Motion Picture Association of America, shared some great news about the movie industry. Dodd said, “Over the past five years, North American box office revenues are up six percent. This year has already begun with a tremendous start: as of April 19 – the box office was up 17 percent over the same period last year.”

The film industry is having great success. With that comes an opportunity to use its power to fight one of the greatest global threats: hunger and malnutrition. In fact, that is what the motion picture industry did when it was just getting started in the early 1900s.

During World War I (1914-1918) millions of people suffered from hunger as food supplies and farmlands were destroyed. American relief efforts, led by Herbert Hoover and many charities, came to the rescue.

Even after the fighting stopped hunger continued. Reconstruction from the war was a big enough task. The European nations were not yet able to produce enough food to sustain themselves. Hoover and other leaders had to find a way to fund aid for the hungry overseas.

The film industry did not sit idle. They took action. Theatres around the country hosted a special Sunday matinee on January 29, 1921 with proceeds going toward European relief. Motion picture actors made appearances encouraging people to attend the event. There was even a contest to see which theatre could collect the most donations.

Hoover’s memoir said the Motion Picture Campaign raised $169,000 to help feed Europe. This fundraising event coincided with a series of Invisible Guest Dinners that also raised funds. The invisible guest represented one of the hungry children in war-torn Europe.

This year the UN World Food Programme (WFP) and Feeding America teamed up with the Hunger Games film to raise awareness of the world’s nearly one billion hungry people. Rene McGuffin, senior WFP spokesperson, said, “The campaign was particularly successful in terms of raising awareness about hunger among the many fans and the general public. The campaign site, which included a public service announcement featuring the stars of the film, along with an interactive hunger quiz and several online contests, proved to be an effective tool for community engagement.”

In fact the campaign and film inspired some creative fundraising by schoolchildren, including this story on the WFP site. The Hunger Games film also inspired some canned good drives. The more of this kind of social action, the better.

At the time of World War I relief there was a great hope for peace, and for an end to both war and hunger. Those dreams have not been realized, at least not yet. It’s up to the current generation to keep up the struggle to achieve those goals. The film industry can be one of the leaders.

Tagged as charity, The Hunger Games, World War One