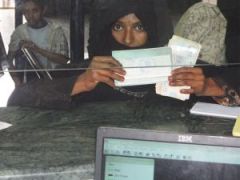 A young Yemeni woman shows her World Food Programme cash transfer card at the Hajjah Post Office. The cash allows her to buy food and medicine for her family. Many Yemenis depend entirely on aid agencies as poverty escalates. (WFP/ Ali Al-Homeidy)

Of all the perils facing Yemen, from political unrest to Al Qaeda, it’s the silent threat of hunger that is the most dangerous.

An additional 5 million Yemenis are on the brink of joining the severe hunger ranks as they too face “food insecurity.” About 10 million Yemenis are facing either severe or moderate hunger. Now you are talking about a starving population equal to that of Massachusetts, Connecticut and New Hampshire.

Even before the Arab Spring unfolded, Yemen suffered from hunger and high rates of malnutrition. Efforts to provide humanitarian aid were underfunded. Then the country, already the poorest in the Middle East, plunged further toward chaos.

Food prices rose sharply in 2011 across the globe. Since Yemen imports a great deal of its food supply, the country fell victim once again to what WFP calls a “silent tsunami.” Yemeni families started to skip meals and this increased malnutrition.

This hunger attack is devastating the future of Yemen, it’s children. In the governorate of Al Mahweet, WFP says 63.5% of the children are suffering from stunted growth. This lack of food impairs a child’s ability to grow and learn. The future of Yemen is therefore stunted.

UNICEF in Yemen has been warning that child malnutrition rates were beginning to rival famine ravaged Somalia. Humanitarian aid is slow to come in and help. UNICEF has not received enough of the miracle food plumpynut, which can save many thousands of Yemeni infants from damaging malnutrition.

The WFP does not even have half of the funding it needs to provide relief to hungry Yemenis. Food for Work and school feeding, initiatives that can build Yemen’s future, cannot get off the ground. And WFP may need more resources as the curtain is lifted off a hungry and malnourished population.

Hunger may be silent, but it can topple Yemen faster than any other force. Until the international community helps Yemen overcome this enemy, the country will spiral backwards. A country hungry and weak cannot progress.

Hunger, along with its companion chaos, leaves the door open for extremist forces like Al Qaeda to gain strength. Are we willing to take that risk?

Article first published as Silent Threat of Hunger Gravest to Yemen on Blogcritics.