Food Aid for Tajikistan Held Up in Uzbekistan 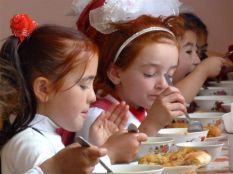 Food for the school feeding in Tajikistan has been limited because of the railway blockade in Uzbekistan. Low funding for WFP has also harmed the program this year. (World Food Programme photo)

The nation of Tajikistan needs food aid. Nearly half the population lives in poverty and food prices are high. In fact, earlier this year children in Tajikistan had their school meal ration reduced because of low funding for the UN World Food Programme (WFP). The WFP depends entirely on voluntary donations.

Some food was on the way to Tajikistan recently by railroad via the neighboring country of Uzbekistan. Yet, the food has been stalled in Uzbekistan for a month when there are hungry people in need. Why? Here are WFP Tajikistan country director Alzira Ferreira’s answers to questions about this situation.

Why are the WFP supplies for Tajikistan being held in Uzbekistan?

The WFP supplies are part of several hundred wagons stuck in Uzbekistan since 17 November. The issue affects all cargoes, both commercial and humanitarian. There are several different accounts of what happened in the Uzbekistan’s side of the rail line that connects that country with the southern Khatlon Region of Tajikistan. I believe the reasons reported in the press (explosion, mud flows, damaged rail bridge) are most likely an excuse for economic and political motives.

How long will it take for the repairs to be made and rail transport can resume?

The Uzbek rail authorities are not providing clear indications of when traffic will resume but have advised our suppliers, under whose responsibility the food is, to divert the wagons via Dushanbe. It does not look like there will be any immediate resumption of rail activity in that line. The other rail connections are not affected.

Are there alternatives such as some food being moved through by truck or air? Is Uzbekistan considering this possibility?

Yes, there are alternatives. Tajikistan is served by three rail lines from Uzbekistan: the one currently interrupted which serves the South, the most populous area of the country; another rail line connects Uzbekistan with Dushanbe and another connects with the northern Sughd Region. We have just made a decision to re-route the wagons intended for the South by rail to Dushanbe and then truck the food South. This brings additional transport costs but it is an alternative.

How much food supply does WFP have left for school feeding and other programs?

WFP still has supplies both in the South and Dushanbe (just over 1,000 tons) but they are insufficient to meet all the needs of planned programmes. For the next three months we need over 3,000 tons of food, so the food held in Uzbekistan is very much needed, and fast. Thus the decision to divert the stranded wagons and future deliveries via Dushanbe.

Article first published as Food Aid for Tajikistan Held up in Uzbekistan on Blogcritics.