Feed a “Silent Guest” from the Philippines 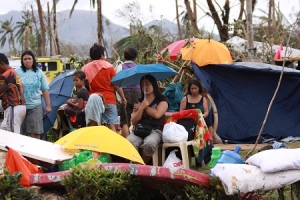 The UN World Food Programme and other aid groups are rushing aid to those displace by the typhoon. (WFP/Praveen Agrawal)

Right now there are millions of people suffering from hunger in the Philippines after the super typhoon. There is no food, water or electricity in storm hit areas. Humanitarian agencies are rushing to get aid to the suffering.

What can you do to help? You can follow the great American tradition of feeding a “silent guest” at your next meal.

Set an extra plate or just use your imagination. Figure out how much it would cost to feed a “silent guest” at your next meal and send that amount to a charity. You could send it to Save the Children or Catholic Relief Services, two charities that were providing aid when the “Silent guest” program was first active after World War II.

You could donate to UNICEF or the World Food Programme, Or any charity of your choice.

There is another way you can feed a “silent guest” from the Philippines. This comes by way of a free app called Charity Miles and Lifeway Foods. You download the Charity Miles app, select World Food Programme as your charity. Then you just run, walk or bike and funds are raised for WFP, paid for out of a corporate sponsorship pool.

Lifeway Foods, in response to the Philippines disaster, is increasing its sponsorship of Charity Miles and offering an incentive. Whenever you use the app Lifeway will donate an additional 25 cents per mile (up to $20,000) to the World Food Programme.

Charity Miles is a free an easy way you can feed a “silent guest.” Just bring your smartphone and your heart.

The “silent guest” tradition got its start in 1947 when the fate of war-devastated Europe rested upon food for the hungry. A one-time aspiring actress, Iris Gabriel, proposed the plan to Governor Robert Bradford of Massachusetts. It took off around Thanksgiving time and it led to people buying “CARE packages” to feed the hungry in Europe.

Governors around the country mobilized their respective states. Today, we are seeing a similar development. Governor Bob McDonnell of Virginia issued a statement today encouraging citizens to donate what they can.

You can help build the pipeline of food that WFP is going to need for some time. A shipment from the U.S. Food for Peace program just left Miami with high energy biscuits to be distributed by WFP. We also need to make sure the Congress increases Food for Peace funding in the upcoming Farm Bill legislation.

Let’s all take in a “silent guest” and help feed the storm victims in the Philippines.